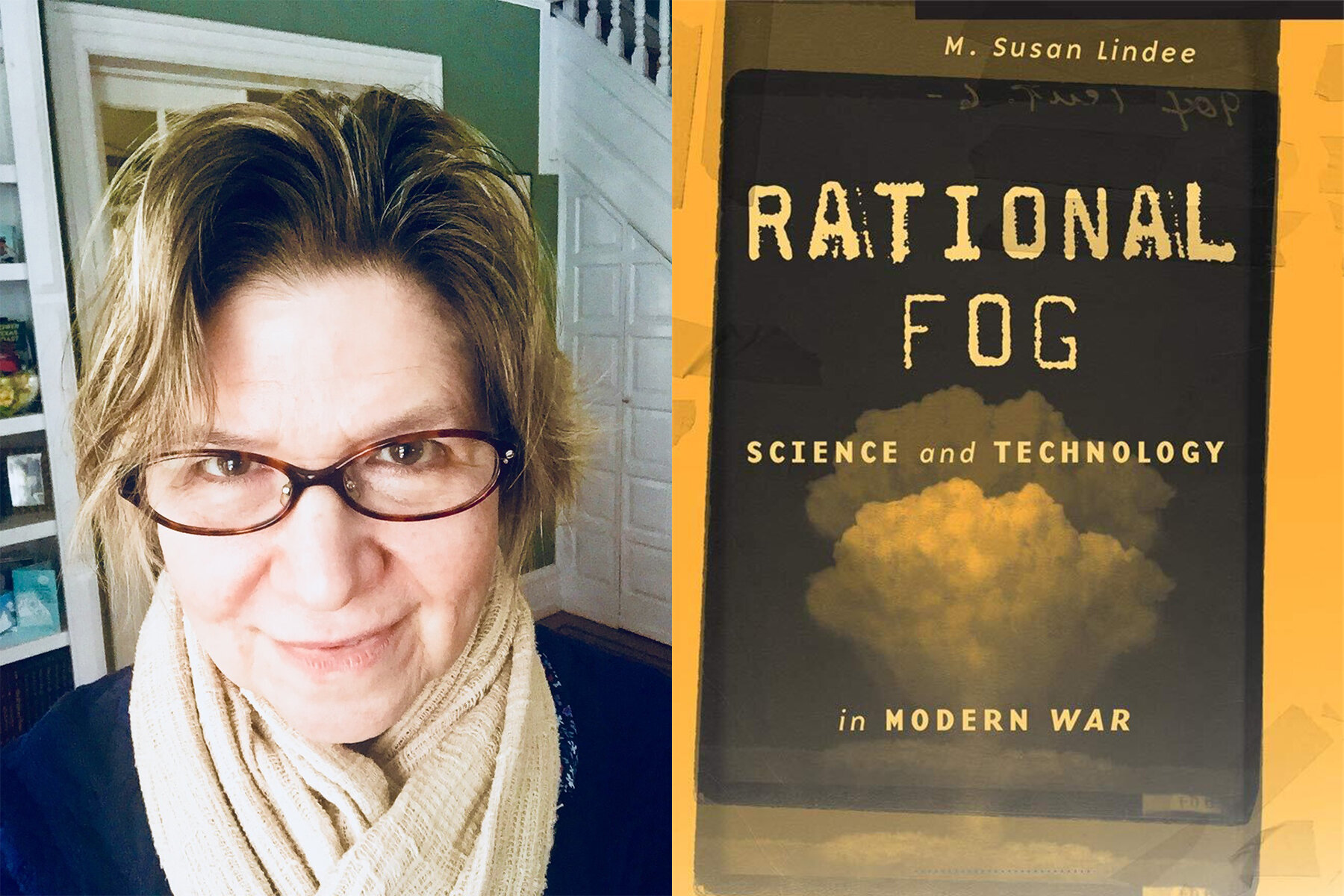 Scientific advancements can both heal and harm. The discoveries that underlie technologies from the gun to the atomic bomb emerged from the minds of scientists. Consequently, the creators of those and many other technologies have found themselves in moral quandaries resulting from the violent application of their insights.

In a new book, “Rational Fog: Science and Technology in Modern Warfare,” published by Harvard University Press, M. Susan Lindee, a professor in Penn’s Department of History and Sociology of Science, explores how science and scientists have engaged in the advancement of military might.

In nine chapters that span the invention of guns in the Middle Ages to the emergence of drone warfare, she charts the nuanced moral terrain scientists have walked in developing these technologies. Without labeling the work itself as moral or immoral, Lindee notes how some researchers embraced the implications of their studies and innovations, while others distanced themselves from the consequences. The book is already generating discussion among historians of science and technology; Japanese and Russian translations are in the works.

Lindee spoke with Penn Today about “Rational Fog,” including how it emerged from her teaching at Penn; the moral crises some scientists faced; and what the flashpoints for science’s application in violence may be in years to come.

What is the origin story of the book?

It’s a long set of thought processes. I’ve been teaching the course Science, Technology, and War for almost 20 years. As I taught the course I’ve been continually trying to think, “How do you convey this subject to students? How can you help them see what escapes them? What will they read that will really connect with them?”

My own research has been about the atomic bomb and the Cold War and how geneticists and biological scientists navigated this era, how they reacted to the idea that military interests could shape their interests. I got interested in the bigger theme and the more personal theme: How do individuals navigate these complex and morally vexing circumstances?

So I thought, “Let’s pay attention to how individuals make their way through circumstances they consider vexed or contradictory to their core values.” I didn’t want to say, “Here are the good guys, and here are the bad guys.” It’s a way of making yourself innocent.

What do you mean by ‘making yourself innocent?”

One thing I’m trying to suggest is, in the complexity of the culture we live in now, it’s hard to see how you get to an innocent place, how you don’t have a connection to suffering. So given that, I’m interested in what it means to move forward with integrity.

In the book, these guys—and it’s mostly guys I’m talking about—they were caught in a system that violated some core values of what it meant to be a good person. I focus on the individual, what happens to the individuals who are caught inside these massive systems.

The book runs essentially chronologically, with each chapter focusing on different time periods or different wars. Why did you choose that structure?

The book very much reflects my lectures. The first chapter, on the gun, asks how a gun is to be understood as part of a sociotechnical system. It’s about using the gun and even rejecting it. That lecture began as, “What does it mean to stand with a gun in your arms? What is the culture you’re inside when you hold this thing steady, an object capable of inflicting injury at a distance?”

So it is chronological in some ways, but it’s not a conventional history. It starts not with a detailed history of the gun but rather an exploration of what you learn if you think about the gun in that way. I’m interested in what the historical experiences of these technological systems help us see. What do they bring out into the open?

Some readers might be surprised to see the links between social science and war, which you talk about in a later chapter, “Battlefield of the Mind.”

The social science stuff is fascinating. When debates about the creation of the National Science Foundation began in 1946, it was in theory a replacement for the wartime Office of Scientific Research and Development. OSRD did so much. It started work on the atomic bomb; it oversaw the development of penicillin. Scientists came out of the Second World War feeling like they had transformed the war; they won the war not just with the bomb but with healing technologies, too.

The Cold War was a war of display of weaponry, but it was also a war of persuasion. They had to persuade people in what was then called the Third World or what we call the Global South or the poor world that democracy and capitalism were better than communism.

Social science could help address this with investigations of how the human mind works, how can you educate people because education is a form of persuasion. Anthropology became a hand maiden to the Cold War, and of course psychology was also really important.

A lot of this work obviously happened at universities, like Penn. Can you describe how research ties together the modern university and war?

So what happened to universities in the U.S. and elsewhere was shaped by the Second World War and the realization that victory might depend on having good scientists. And there is not any scientific field that did not at some point get pulled into defense interests in the course of the 20th century—even fields like archeology and ornithology. The number of faculty went up like a balloon in the ’50s and ’60s. People would finish their Ph.D. and have seven job offers.

And as a result, there were shifts in who was supposed to go to college. It became plausible for someone from the working class to attend university. And this period also sees the opening of many universities to women, especially public universities.

You can talk about all the liberal ideas at universities. But they are also defense hubs. They make new knowledge for national defense organizations.

And you note that the reverse is true, that war is a hub for new scientific knowledge.

One of the key arguments in the book proposes that battlefields have been significant scientific field sites over the last century. I show how scientific research could be built into invasion plans, and knowledge could be one downstream result of violence, just as violence was one downstream outcome of knowledge production. The idea that war generates ‘collateral data’ in this way—unexpected knowledge produced by the chaos of war—has been noticed by reviewers and picked up by other scholars.

I also propose, somewhat controversially, that those injured and killed by weapons systems should be understood, in our historical accounts, as ‘consumers’ of weapons systems. So much historical attention has been afforded to those who make weapons, use them, and decide to deploy them. But understanding technological systems of all kinds requires attention to those who consume them. The experiences of these involuntary consumers on the ground are crucial to any historical assessment of military technology. I actually find it a bit odd that entire books can be written about guns without mentioning people who were shot and killed.

Your title references the “fog of war,” but what do you mean by “rational fog?”

In my field there’s a lot of attention to modern rationality. The concept comes out of the scientific revolution. It’s the valorization of the idea that reason can get us somewhere new, somewhere different, with a better understanding of the world.

When Carl von Clausewitz, a Prussian military analyst, talks about the fog of war, he means that the view of a commander moving into a battlefield is obstructed, that the situation is uncertain and unpredictable. Decisions about when to attack, when to withdraw, take place in a kind of a dream state of intuition, experience, guessing.

My title extends this idea to technical experts. I suggest that my actors, the scientists I write about, who valorize reason and who take reason as the purpose of their work and their life, are also themselves inside the fog. The fog is a moral and ethical fog. They’re moving forward, trying to make decisions about what questions to pursue and technologies to produce, often doing so without foresight, reflection, or overt ethics.

What do you see as the major moral scientific quandaries to come in the future?

The brutal stuff that’s coming is drones and cyberwar. I talk about both in the book’s conclusion. Cyberwar is now where significant funding is going. States and nonstate actors are already engaged in manipulating information in cyberwar. But there are also equally scary efforts aimed at intrusion into corporate networks, disruption of banking systems, having an impact on water purification systems, or, most recently, disrupting the cold chain for the new coronavirus vaccine. These are nightmare scenarios.

Drones are somewhat different. I talk in the course and in the book about how drones affect the concentration of military power. They remove what we might call a natural brake on military action. Individuals can and do sometimes refuse to fight; soldiers can shoot their guns above people’s heads, they can desert, they can protest, all forms of resistance. All through the history of warfare, in order to have an effective army, it has been necessary for states to persuade relatively large numbers of people to fight.

The new prospect of drone warfare is roughly this: A billionaire can have an army of 100,000 and doesn’t have to persuade a single person that their cause is just. We’re not there exactly yet, but drones are a way of concentrating power in corporate actors, or extremely wealthy individuals. Military theorists propose that the robot or the drone eliminates the risks to individual soldiers, but the risks to individual soldiers are part of what puts a brake on violence.

How did you get interested in the questions of science applied in war in general?

I was raised in an intense Catholic environment. I grew up in a world where the words of a priest determined what truth was. Even then I began to think, “Do priests have a reason for what they believe? Do they know what they’re talking about?”

In looking at these difficult subjects what I’m saying is, “Let’s notice this; let’s not turn away from this.” Why do we how to send a missile around the curve of the earth while we don’t know how to cure malaria? There’s an inherent critique in the book: What if we turned knowledge to human needs and human benefits instead? One of my friends says the book is subversively pacifist. Maybe that’s true.

Provided by
University of Pennsylvania

Citation:
The interplay between scientific progress and violence in modern war (2021, January 11)
retrieved 12 January 2021
from https://phys.org/news/2021-01-interplay-scientific-violence-modern-war.html

This document is subject to copyright. Apart from any fair dealing for the purpose of private study or research, no
part may be reproduced without the written permission. The content is provided for information purposes only.